After their win over Counter Logic Gaming, I spoke with Clutch Gaming’s AD carry Apollo “Apollo” Price about early game struggles, the Houston Rockets, and listening to Nam “LirA” Tae-yoo.

Miles Yim: This win over CLG felt a harder-fought than the last time you beat them. They seemed to control the early game really well.

Apollo: I think in general they had a better early game than us, they really drafted towards it. That was the main reason they were winning the early game. But in order for us to stabilize, it was really important for the bot lane specifically to call for resources when we had them available. We didn’t do a good job of that, so once they took our turrets, they kind of snowballed from there. They took turret bot, then top, then Herald as well to take mid. The only upside to that was that we were taking dragons. We got a pretty early ocean, and then also an Infernal as well. So even though our early game was shaky, it could have stabilized where they take out outer turrets maybe ten minutes later, rather than around the 15-minute mark, which was really bad. We just needed to stall out so when they do take our turrets, we have more items. After our comp hit our power spikes, that’s when we started to fight, and that’s when we turned it around.

I have to ask you about that final fight around the Elder Dragon, when [Colin “Solo” Earnest] got two Sion ultis off during one sequence.

Yeah, during that entire time we had to talk a lot about our teamfighting. We had to realize what to do next, because we kept getting caught out, getting engaged on, and we weren’t used to that kind of engage where they had Zac, Kalista, and Rakan. We kept talking throughout the game about this teamfight, how we were going to play it out. And I mean, the Sion ulti is kinda funny because it’s a 30-second cooldown or something like that. But we all played [the last fight] really well. Solo played the game phenomenally, but as a team we really did a good job of keeping ourselves together, because it did feel like a free win at some point. After we got the first Baron, it felt like okay, we just win now. We have a better scaling comp, we’re the better team. So even though we got caught out and made a few mistakes, we did a really good job pulling ourselves back together and talking it out as a team. And in that Elder fight, we just kept track of Zac, talking about our cooldowns, and Sion just fucking ulti’d them.

I thought LirA had a better performance today than he’s had recently. How have you guys helped him get back into a groove?

LirA is the one player on our team that always has…We kinda always say the obvious things, what we need to do. We do a really good job of talking and working things out. But I think LirA has a different mindset a lot of the time, he always has a different opinion, which I think is super important. He always has something that’s generally smarter, but we don’t think about. That’s why I like him so much, because he just thinks about the game differently than I do, or the rest of the team does. His opinions mean a lot, even though he might not talk as much due to the language barrier. He’s really important to keep the team from being mediocre. He makes the team above the regular tier.

Without giving away trade secrets, can you give me an example of how LirA sees the game differently? 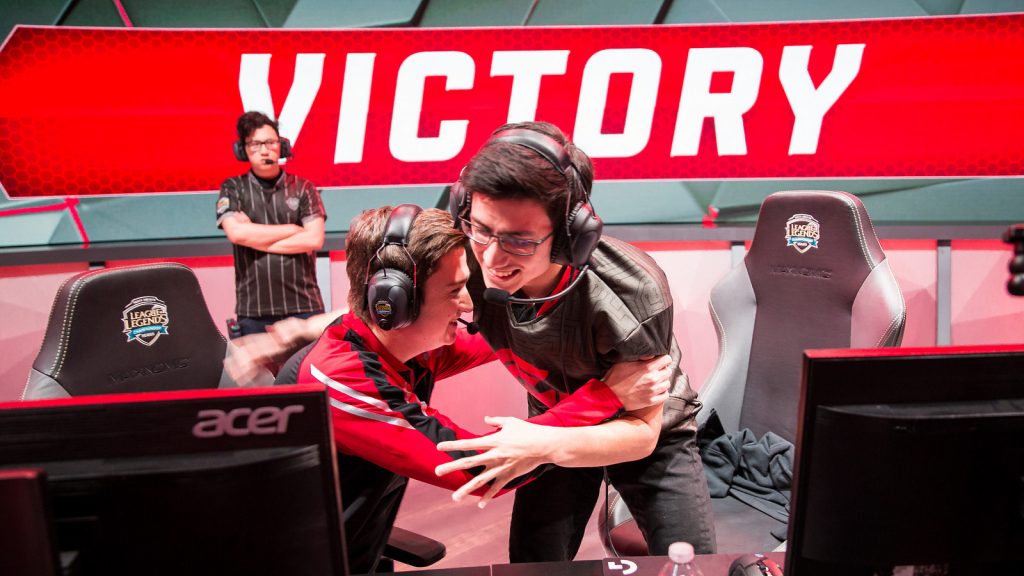 Clutch Gaming has been playing to its moniker recently, a lot of close victories where you’ve had to come from behind. You’re 7-4, how do you think the team is coming along?

I’ll be honest: I didn’t think we’d be doing this well. I thought we’d be more middle-of-the-pack, but now we’re starting to be one of the top teams at the moment. I still think we have a lot to prove. We have C9, Echo Fox and Team Liquid all coming up, and those are all teams we need to beat. But even if we weren’t winning, I feel like we’re improving. I know that’s a clichéd thing to say, but it didn’t feel like we took a hit from those loses. It felt like we were improving, and we just kept going. Now each win that we get, it feels like we’re adapting to our playstyle. We’re taking stuff we got from scrims on stage and actually performing with it. The team atmosphere feels like we’re really driven, and I like that about these guys.

Can you pinpoint something about your team’s play that you need to improve on to play with the top teams?

I think early game has been kind of a struggle. Depends on the draft, but sometimes when we play a late game composition, it feels like we play too quickly, too rushed. We have to purposely slow ourselves down to not get caught up in that. We obviously have a lot more mistakes, but that’s one example.

It’s interesting you highlight the early game as a weakness, considering that Team EnVyUs last split was one of the best early game teams in the league, and this team retains its key components. What’s changed?

I don’t know. I think it was just our playstyle back then, we drafted heavily towards that. It had to do with a little bit of both, where we just had early game driven playstyles and just throw in the late game, or do whatever we did. I think [on Clutch] we want to adapt to both scenarios, where we can play both early and late game, or mid game stuff. It’s just about adapting and being able to play different playstyles. We’re trying to work on that.

Has the best-of-one format forced teams to play safer, late-game comps? Has it had any stylistic impact at all?

I don’t think so. It’s mainly the meta, the champions that are being played right now, the playstyles of some teams. I definitely think you can play early game stuff, it’s just right now, teams don’t know how to close out that cleanly, us included. That’s why these late game things happen, people don’t know how to close the game out, then the games stalls out, and now it’s 60 minutes. Maybe Gathering Storm has something to do with it, I think it’s a unique mastery that a lot of people are starting to take now. But other than that, I think it has to do with the champions that are being played.

Switching gears, Clutch Gaming is a new org backed by the Houston Rockets from the NBA. What’s been your experience interacting with Daryl Morey and that side of the franchise? Have you met James Harden, for instance?

I have not met James Harden [Laughs]. I wish, you know? Maybe someday. Daryl Morey, he’s a nice guy. They’re really professional, and they want us to do well. I’m not going to pretend they’re always coming to our games and stuff like that, but I know they will do whatever it takes for us to win. They’ll bring in all the resources if we need them to. They’ve been really useful, always thinking about better ways for us to improve as a team, and if we need help. It’s what I like about them.

In what way have you seen them thinking about new ways to help your team?

I think it’s the coaching staff in general. The coaching staff is one thing, but they kept thinking about a structure for us to practice better. One example is…actually I’m not going to say the example [Laughs]. No examples, they’ve just been working with us a lot.

Part and parcel with Daryl Morey’s involvement with Clutch is what seems to be a heightened focus on analytics. He famously championed “Moreyball” in the NBA, and a lot of the promotion of Clutch in the beginning centered around they’re “analytical approach” to League of Legends. But I spoke you your lane partner earlier this year, and he seemed to think that the idea Clutch was built on analytics was “overstated.” What have you seen, if anything, of this analytical approach so far?

Before we go on, I should ask: Do you follow basketball at all?

I follow the Rockets, sort of. I kinda started watching them after I joined the team. [Laughs]

Well to make a long story short, Morey initiated a change in the way the Houston Rockets played based on data/analytics designed to exploit inefficiency in the sport. For instance, he changed the team’s shot selection to favor three-pointers and layups over mid-range jumpers because the data told him taking primarily those shots was the most effective way to win.

But in League of Legends, is there a similar inefficiency for teams to exploit? Put another way: Is League of Legends the kind of sport that can be solved, or changed, by analytics the way basketball and baseball have?

That’s a really good question, and I wish I could answer that!

Is it because you don’t know, or won’t tell me?

I just don’t know! I hope they find that out, I want to know that as well. I don’t think I’m the right person to answer that question.

Fair enough. Looking forward, the last time you made playoffs was last split, losing a close five-game quarterfinal series against CLG. What have you learned since then that will help you come playoff time this split?

I’ve learned a lot about teamplay and macro. As I said before, I’m constantly thinking about the game differently now, it’s not really one-dimensional anymore. It has to do with the new coaching staff, but it’s hard to say anything specific, because there’s so much I’ve learned. One thing I have gotten better at is calling for what I need, calling for resources, as well as directing what I need to have happen. If I want my team to play around me, I have to be the one calling it out. That’s what I’ve been working on a lot. I know a lot of people have just seen me as someone who’s there for the ride, just playing the game. Maybe that’s true, maybe that isn’t, but know I feel like I need to be the on driving the team, and my own playstyle.

If you do make playoffs, is there a team you don’t want to play?

Right now, Echo Fox is the strongest team, so if they can suddenly drop ten games or something, that’d be great [Laughs]. They have a unique playstyle right now; it’s really obvious what they’re doing but not many other teams are doing it. I think teams will start to figure them out, but I do think they’re the strongest right now, and there’s no reason that I’d want to play them in playoffs.

The NA LCS can be found streaming on Twitch, YouTube, and at lolesports.com.

This transcript has been edited for clarity.